What is the issue?

Classing misogyny as a category of hate crime would not make anything illegal if it’s not already. Instead, it would help to bring together the understanding of the forms of violence and abuse women and girls experience by ensuring all were recorded. It would mean police forces can better support victims, and make them aware of where incidents are reoccurring. Women and girls need to feel their concerns are being taken seriously by the police and that misogyny is not normalised.

In 2016 Nottinghamshire Police became the first police force in the country to enable women and girls to report cases of abuse and harassment as misogyny, this includes stalking, groping, indecent assault and kidnapping. Four other police forces have since followed suit.

What more can be done?

The campaign to make misogyny a hate crime returns to the House of Lords next week as parliamentarians seek to ensure all police forces record the violence and harassment women face. Amendment 87B to the Domestic Abuse Bill, which has cross-party support and backing from a wide range of campaigning organisations, will be debated on Monday 15th March 2021. It would require all police forces in England and Wales to record where existing crimes have been motivated by hatred of someone’s sex or gender. 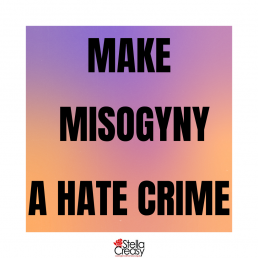 Please write to your MP and ask them to support making misogyny a hate crime by encouraging Peers to support amendment 87B to the Domestic Abuse Bill.

Write to your MP

The Amendment
The Domestic Abuse Bill states that the Secretary of State must give guidance on the kinds of behaviour that amount to domestic abuse. The proposed amendment 87B, states that the guidance should further take account of evidence about the relationship between domestic abuse and offences involving hostility based on sex. The wording is as follows:

The amendment has been tabled by Labour’s Lady Kennedy, and has been co-signed by Conservative Peer Baroness Altman, Cross-Bench Peer Lord Russell, and Conservative Peer Lord Young. The campaign itself has been backed by a wide range of political leaders across the country including Mayors Andy Burnham, Steve Rotherham, Sadiq Khan and Dan Jarvis, Police and Crime Commissioners David Keane (Cheshire), Paddy Tipping (Nottinghamshire), Sue Mount Stevens (Avon and Somerset), Alison Hernandez (Devon and Cornwall), Julia Mulligan( North Yorkshire), and multiple councils across the country passing motions in support.

Stella Creasy MP who has been coordinating the campaign said:

“I urge every woman who has walked with keys in her hands at night, been abused or attacked online or offline to come forward and be heard. This is our moment for change - rather than telling women not to worry about violence or to stay home at night if they want to be safe, its time to send a message that women should be equally able to live free from fear of assault or harm from those who target them simply for who they are."

The Jo Cox Foundation has worked closely with many civil society organisations, charities and MPs on the campaign to make misogyny a hate crime.