In July 2017, the Committee on Standards in Public Life (CSPL) was asked by the then Prime Minister, Theresa May, to undertake a review on the increasing prevalence of intimidation in public life. The CSPL is an independent, advisory body that advises the Prime Minister on arrangements for upholding ethical standards of conduct across public life in England. The CSPL regularly publishes a progress report on recommendations it made in the Intimidation in Public Life report.

We have worked closely with CSPL since 2019 to produce the Joint Statement on Conduct of Political Party Members, which sets out the minimum standards of behaviour that can be expected from members at all times for parties that have signed on. The statement is not intended to supersede or replace party codes of conduct or disciplinary processes, but to complement them by acting as a high-level statement of principle outlining the minimum standards of behaviour that all party members should aspire to.

We are delighted to have support so far from Labour, the Liberal Democrats, The Green Party of England and Wales, Plaid Cymru and the SNP.

1. Representative democracy is a central and valued characteristic of our national life. We believe it is in the interests of us all for Parliament to reflect the diverse population it serves so that decisions that impact the public reflect the realities of life in the UK. In recent years, intimidation  experienced by Parliamentary candidates and others in public life has increased and has threatened the diversity, integrity, and vibrancy of our democracy.

2. The statement on conduct of party members (the Statement) sets out the minimum standards of behaviour we expect from our party members at all times.

3. The Seven Principles of Public Life (the Nolan Principles) - selflessness, integrity, objectivity, accountability, openness, honesty and leadership - have long been the basis for ensuring high standards in public life. This is the context for the behaviours set out below.

4. Our party members will aspire to:

a. take responsibility for setting an appropriate tone for campaigning and communication;

b. lead by example to encourage and foster constructive democratic debate and tolerance of other points of view; and

c. promote and defend the dignity of others, including political opponents, treating all people with courtesy and respect.

5. As a minimum, our party members will not engage in intimidation by:

a. using or threatening violence or other unlawful force;

b. damaging property or making threats to damage property;

c. engaging in bullying, harassment or victimisation, or unlawfully discriminating against another person or group;

d. using abusive or threatening words or behaviour, including the use of hateful or sexualised language or imagery;

e. making vexatious or malicious allegations of illegal or improper conduct or;

6. Our party members are expected to challenge unacceptable behaviour wherever it occurs.

7. Behaviour that falls within the unacceptable behaviour listed in the Statement will be dealt with under our party disciplinary processes.

8. In some cases, including but not limited to offences against the person and damage to property, as well as credible threats of violence, the behaviour may be illegal. We will refer any breach of the Statement which appears to break the criminal law to the police.

What is intimidatory behaviour?

The 2017 Report of the Committee on Standards in Public Life, Intimidation in Public Life, interpreted intimidatory behaviour as: ‘words and/or behaviour intended or likely to block or deter participation, which could reasonably lead to an individual wanting to withdraw from public life.’

1. Intimidation can include physical violence, threats of violence, damage to property, and abusive online and offline communications, amongst other behaviour. Sometimes, the collective impact of a number of individual actions can also be intimidatory, for example, co-ordinated social media attacks. A clear finding of Intimidation in Public Life is that intimidation is disproportionately likely to be directed towards women, those from ethnic and religious minorities, and LGBT candidates.

2. Robust political disagreement is part of the democratic process; highly personalised attacks are not. Intimidatory actions are not a way to apply legitimate political pressure. Instead, they are intended and likely to cause an individual to withdraw from a public space, including social media, public events, or from public life altogether. This can have the effect of limiting freedom of expression.

This #GE2019 we are calling on all candidates to participate in a respectful campaign. We encourage them to share this strong, positive message of kindness and #moreincommon. pic.twitter.com/jEALS0grKX

The Election pledge was shared by hundreds of candidates from all political parties and gained over 1 million views on social media.

In the Batley & Spen, Jo Cox's constituency, the candidates for Labour, the Conservatives, the Liberal Democrats, the Brexit Party, Green Party and Independent candidate Paul Halloran signed the election pledge and promised to: 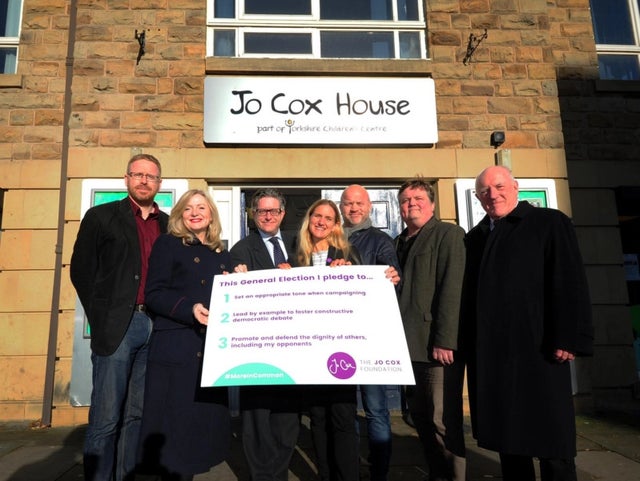 They signed the pledge outside Jo Cox House in Batley Market Square close to where Jo was murdered during the 2016 EU referendum campaign.

“My sister believed in robust political debate, but she also believed that we can debate our differences without abuse or personal attacks. It means a great deal to my parents and me that the candidates here in the constituency that Jo loved so much have signed up to the kind of politics she represented.

“Here in Batley and Spen we know the price of hatred and political violence, but this is a call that I believe should be taken up by candidates all across the country. I hope desperately that in a few weeks time we will be able to look back on an election that upheld the standards of decency and respect that our democracy was once famous for and can be again.”