For this Volunteering Spotlight, we spoke to Sharron Wilkinson, Founder of Give…A Few Words.

The lockdown was an incredibly challenging period for many, especially people living in care homes. Without family and friends, the residents became increasingly isolated, and that’s where inspiration struck for Sharron:

“I was working for a charity, and it came about from a care home contacting us saying that the residents were really isolated and they weren't going to see family and friends at that point, so could we think of anything to try and alleviate some of that isolation? And this idea of letter writing came up, and then it just completely snowballed.”

And snowball it did. With hundreds of volunteer letter writers rising to the challenge, the idea of letter writing grew and transformed into Give…A Few Words, a Community Interest Company aiming to “reduce social isolation and improve social connections within the community” through letter writing, surprise pop-up events and their Give...A Few Words Network Meetings.

Give...A Few Words organises volunteers across the country to write letters, make crafts, and create art. These can either be done at pop-up workshops, submitted online, or sent to Give...A Few Words PO BOX. The completed gifts of letters are bundled up and sent out monthly to care homes, charities, and even workplaces in Kirklees and Calderdale.

“Workplace loneliness is a thing as well with people working from home…there's a batch of letters we send out, so people don't just receive one letter, they actually receive an envelope with 4 or 5 different letters and arts and crafts and all sorts of things.”

There’s a real “diversity to it,” says Sharron, “because every single letter or craft or anything that comes in is unique to the person that's done it…You're getting this bundle of loveliness really from different people.”

Sharron believes that negative messages can be overpowering, and it’s vital to try and change that narrative “so that we’re receiving more positive messages. I think with this, it epitomises the best of humanity really. You're seeing the kindest of people. You're seeing compassion. Sometimes I have to pinch myself and think I'm really lucky to be able to work on this. ”

She sees this flowing positivity every day, concluding, “People are nice. I think sometimes we're given that people aren't that, but generally, most people - people involved in this - are really lovely.” 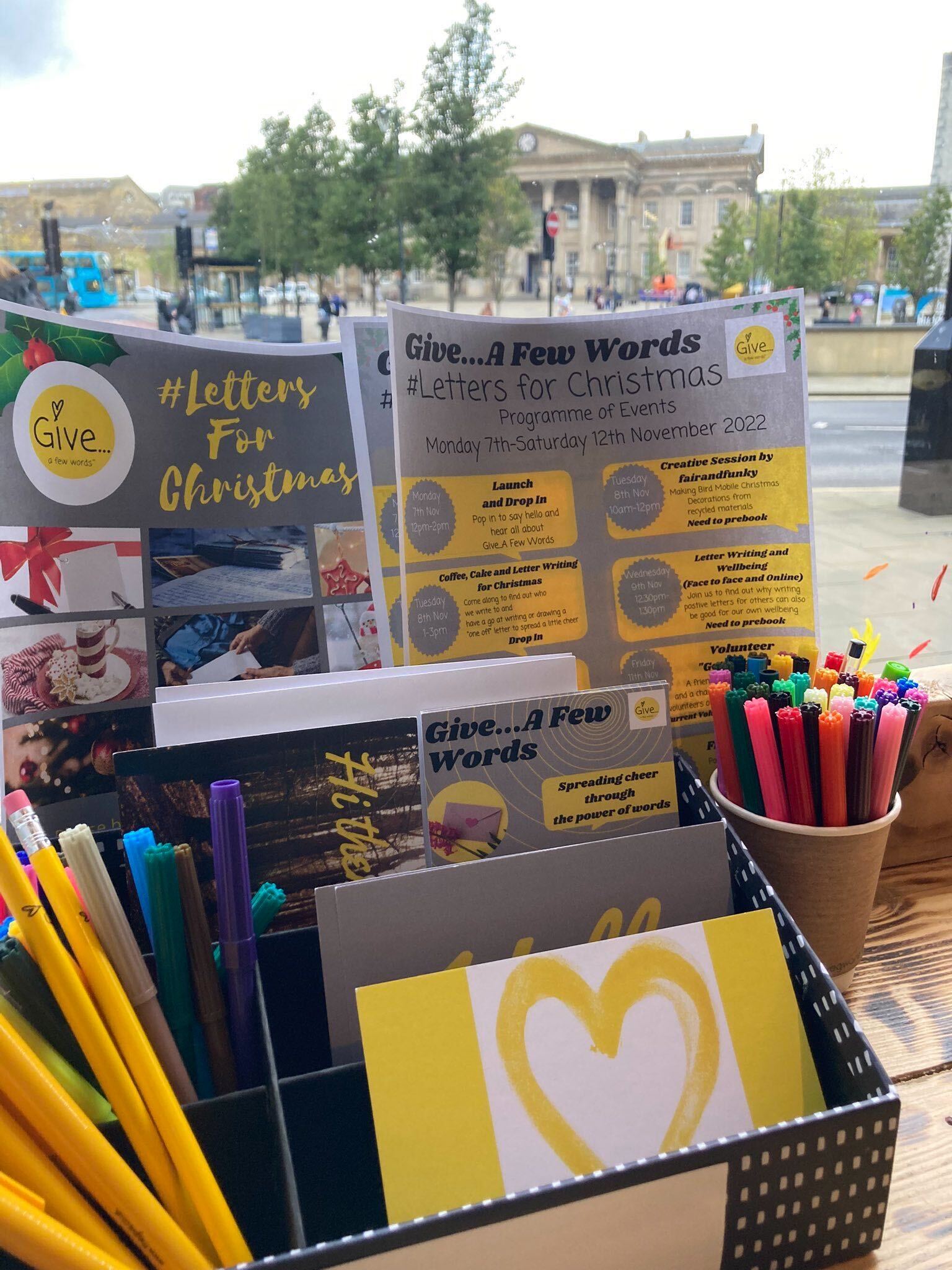 The roughly 500 volunteers hail from across the country, and even the world, with writers in Paris, Mexico, America, and Canada giving their time to bring a little joy to the residents of Kirklees and Calderdale. However, this number doesn’t cover the letters and crafts arriving from local businesses and schools, or during regular workshops and campaigns, where volunteers could number into the thousands. It’s one of the best things Sharron has seen grow out of the project.

“Every time I open a letter from somebody, I'm just always really humbled that somebody will write to somebody that they don't know and they'll go to so much effort for nothing in return…the amount of effort and the amount that people put into the letters that they send…I'm humbled by that.”

The letters and crafts they send cover a whole host of topics, “anything you can think of. They've written about history, films, movies, usual, sports, football, and rugby. More unusual things, floods, things that have happened, steam trains…people have sent their own artwork.”

So, how can you get involved?

Sharron is keen to collaborate and expand letter writing across Kirklees and Calderdale. She’s always looking for volunteers to get involved in writing letters, which you can do by signing up on the Give...A Few Words website with a list of your interests. You’ll then be matched up with someone with similar interests.

If you’re local to Kirklees, there are author and creative workshops bringing volunteers together and collection boxes where you can drop off handmade crafts or handwritten messages. Sharron has seen how uplifting the workshops and letter writing can be to the writers, helping them to be more positive in their lives, “It's really helped them out to focus on something positive and be a little bit mindful as well. It's an activity you can come in, sit in a coffee shop and just have an hour and just write something.”

Charities, care homes, workplaces, and other organisations can similarly sign up for individuals to receive letters. All Give...A Few Words needs is the first name and interests of the recipient. From a safeguarding perspective, letter writers don’t have the full name, location, or any other personal recipient details.

Letter bundles go out monthly, and there’s no obligation for volunteers to write each month, providing an accessible opportunity for everyone. Each bundle can be incredibly uplifting to someone feeling isolated, giving them a “massive boost,” that recipients can “come back to them again and again. So every time they need that bit of a boost and that happens again.”

For Sharron, one “impressive” moment over the last few years has stuck firmly in her mind. A lady from Derbyshire who writes with her husband always seems to craft something different and send in different “creative things every single time”. On one occasion, she was writing to a visually impaired woman who went through some floods in Holmfirth in the 1940s. After doing some research, “she wrote a letter that she actually made a cushion cover and then out of this cushion cover, she'd done like the river in corduroy and then something else in velvet. Basically, because she knew the lady was visually impaired, she'd be able to feel the textures when she felt this cushion and that related to the story.”

“It's a really simple thing to be able to do. One postcard, one craft, one drawing. It's something you can do with your family. We've got quite a lot of couples doing it together, and they really enjoy doing it, talking about who they're writing to, and it's given them a bit of a common interest. It's for anybody. Anybody can get involved. You can do as much or as little as you like, but actually, every single thing we get sent makes a difference to somebody else.” 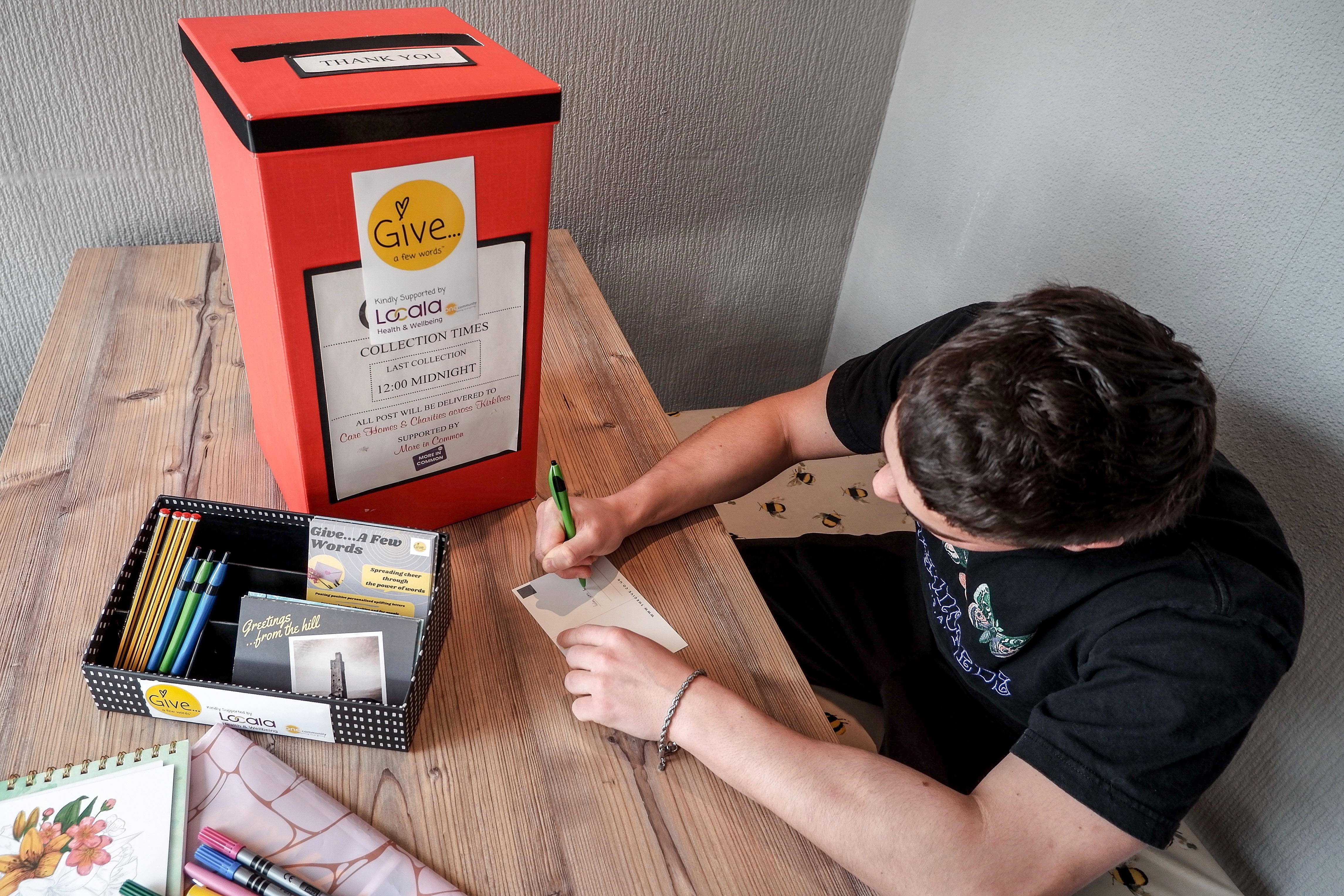