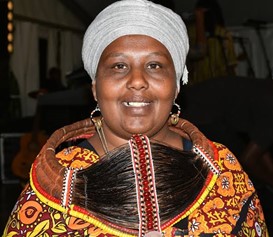 In Northern Kenya, violence in the area has hindered development, consumed wealth and perpetrators have begun to target young people. This includes a recent killing of four students – two studying at university and two still in high school – in what was viewed as a revenge attack.

To combat such violent trends, MRG, along with Isiolo Gender Watch, has established a ‘network for peace’ project in the area. The success of this work, however, is contingent on the engagement of key individuals in the community.

Rose Ngoilel Orguba is a 43-year-old mother of five and runs a small community-based organisation in a village 90kms from the town of Marsabit in Laisamis sub-county. This remote and underdeveloped sub-county is home to Rose's Rendille community which has been in conflict with the Borana and Gabra communities for several years over livestock and grazing space, an issue exacerbated by drought in the region. The conflict has worsened since 2013.

Rose has first-hand experience of this conflict as her family herd of 400 goats was raided in 2001 and her uncle was shot dead two years later during such raids. Rose’s predicament is a microcosm of larger pastoralists’ conflicts and she is determined that all efforts must be geared towards ending such violence. As she says, ‘We are losing the future to violence, we are losing our children, spouses and brothers’. Rose is a Peace Ambassador within the network.

Rose has received Minority Rights Group (MRG) and Isiolo Gender Watch's peace-building training, covering conflict types, causes, trends, actors and management. Rose says she has gained new insights about her context and that she feels empowered to make her voice heard for pastoralists’ families not just in the country, but also in the region.

With an economic downturn due to COVID-19 and Kenyan elections coming up in 2022, there is an increased need for community coordination and preventative measures to ensure violence is not sparked. Networks like those run by MRG play a vital role in bringing together members of different communities, creating dialogue and understanding, and breaking down prejudice. Furthermore, they help prevent future violence by closely monitoring conflict situations, political leaders’ moves and alerting state agencies, particularly the police, of any suspicious information relayed by peace ambassadors.

Waayu and Waata is used interchangeably. They are traditionally hunter and gatherers. The Waata and its political leaders have objected to use of the word Waata which is taken as derogatory.

Jo Cox was a life-long humanitarian, dedicating her career to helping those less fortunate than herself. In honour of Jo's memory and her international legacy, the Department for International Development (DFID) – now the Foreign, Commonwealth & Development Office (FCDO) – launched the Jo Cox Memorial Grants in March 2018. This £10 million UK Aid Direct fund supports organisations working all over the world on two themes: women’s social, economic and political empowerment and strengthening civil society to prevent violence.