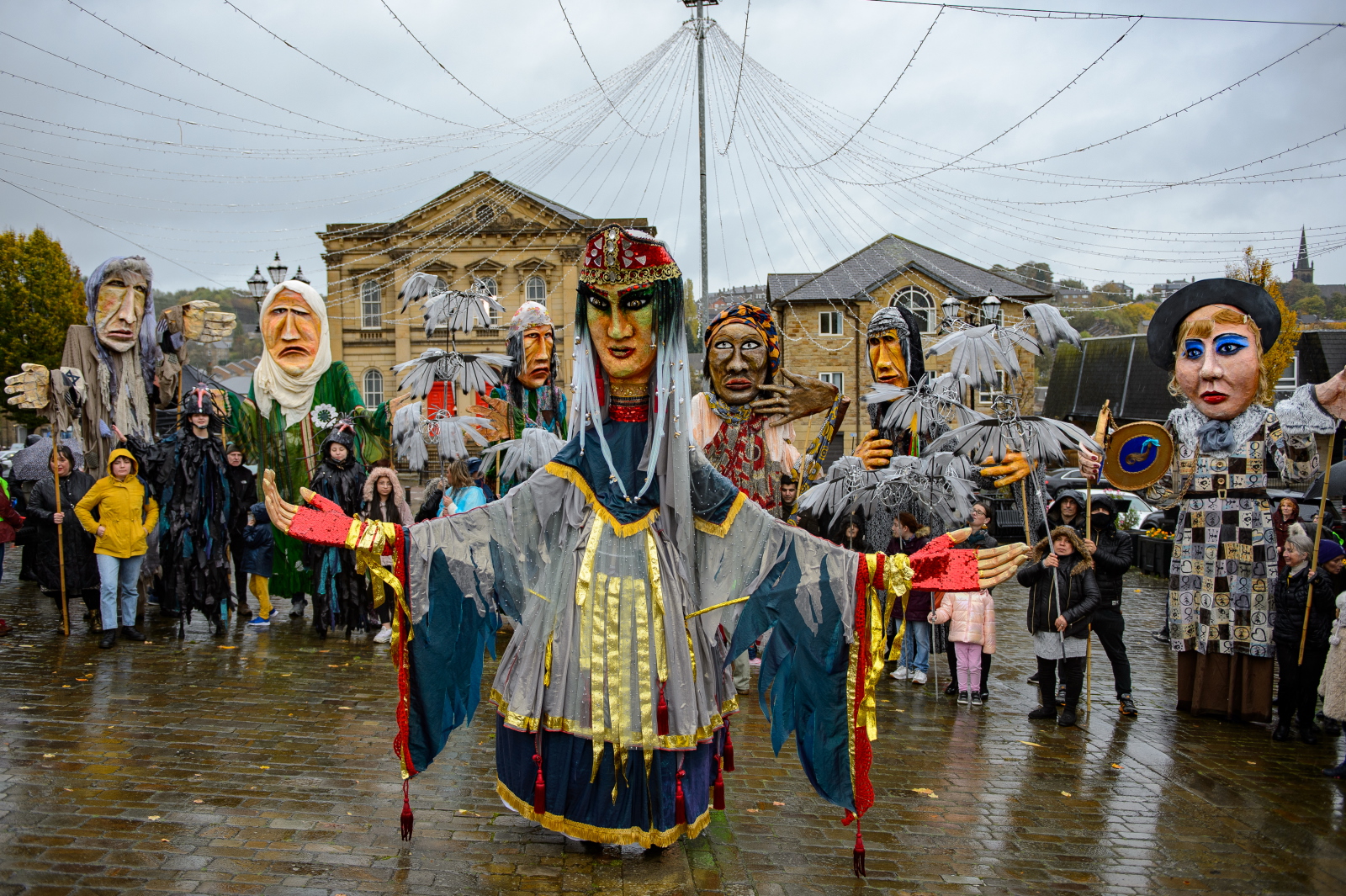 For this Volunteering Spotlight, we spoke to Kim Strickson, one of the founders of 6 million+.

6 million+ Charitable Trust is a creative arts project working with refugees and local communities to exchange stories of the Holocaust, genocides, and contemporary persecution at home and abroad. They do this by creating temporary art installations and events that commemorate Jews and other minorities killed in the Holocaust and continuing genocides to “challenge discrimination of any kind and work towards a kinder future.”

The project evolved from an annual Holocaust Memorial Day held by Kirklees Council, which included community participation. In 2005, an art installation was created for Huddersfield Art Gallery, with over 6 million buttons, to illustrate the scale of the Holocaust and genocides since. It’s “a very important aspect,” says Kim, “As well as the Holocaust, we were remembering Bosnia, we were looking at Kurdistan...Burundi and also Rwanda”.

The community donated the buttons, which almost numbered 7 million by the time it was completed. This eventually evolved into 6 million+, to expand the work beyond one event and carry out a range of “projects that actively involved communities together with refugees”.

6 million+ achieve this by holding workshops in the run-up to events such as Holocaust Memorial Day or Remembering Srebrenica. The workshops help to bridge the divides between people from different communities through arts-based interactions, allowing for the sharing of cultures, languages and that all-important component of any relationship, food.

It’s something Kim’s seen in action at every workshop and event she’s run. Previously, people have brewed special tea and coffee related to their culture that “allowed people to have conversations around the table”. It created a crucial icebreaker that lets anyone and everyone get involved.

Kim also has fond memories of a recent event for Remembering Srebrenica where she asked everyone to bring bread from their culture:

“Everybody brought a decorated basket with their bread, including the Ukrainians, so that was particularly poignant. And we had the big Bosnian weeping sister [puppet], and I don't know, there was something about them all reaching up to her with their breads and the hands coming down. That's all it was, it was very simple, but it was really moving. And then we ate the breads with the foods that the Bosnians had made later. It just felt really lovely.” 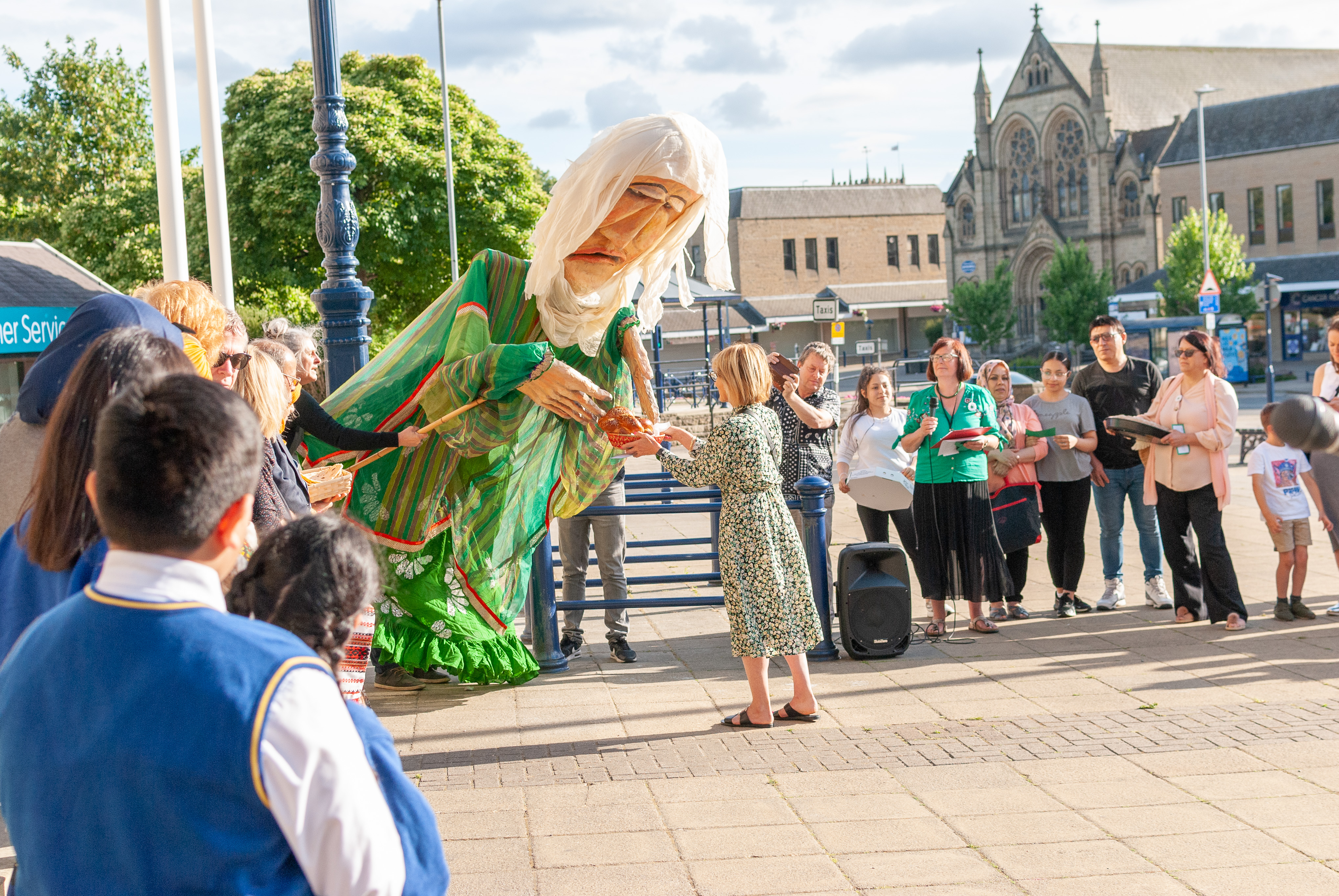 One of their largest pieces of work (quite literally) has been the Weeping Sisters, 7 giant figures, created over several years by local people, artists, refugees, and students in West Yorkshire. Each puppet takes 4-5 people to operate but is an incredible visual display of the work 6 million+ do.

The idea came from Adam Strickson, Kim’s husband, who volunteers for 6 million+. Whilst intimate indoor events for days of commemoration happened at Kirklees town halls and the University of Huddersfield, the attendees included people who were either impacted or aware of genocides and persecution happening globally. Adam realised something needed to highlight the issues beyond those working with and supporting refugees and migrants. They needed an “on-the-street presence to get people’s attention,” and create an atmosphere to reach outside this circle of attendees. And so, the idea of a big Weeping Sister puppet was born.

Very quickly, one puppet turned into two, which turned into seven. With each new puppet, a new community of local people and refugees were brought together, “with more people coming forward” for each one. It’s one of the best things that Kim has seen come out of the project:

“I think that's been the most significant development, in terms of people working on them, making them, but also the effect it's had on people outside on the streets.”

The Weeping Sisters have an annual procession or appearance with music alternating between Dewsbury and Huddersfield, where it captures the audience's imagination and brings to life the work of 6 million+.

But that’s not all. The Sisters have even been on the road, with five sisters attending the Big Ideas by the Sea Festival in Scarborough during the summer of 2022, where they shared stories, music and theatre to encourage people to think about and empathise with asylum seekers throughout the last century.

Unfortunately, due to storage and the sheer number of people required to manoeuvre each one, there won’t be any new Weeping Sisters any time soon. But, Kim has left the door ajar to making something else for the streets.

So, how can you get involved?

The next big event for 6 million+ is Holocaust Memorial Day, where they will have an event outside and inside Dewsbury Town Hall. They’ll be running workshops throughout January that will take place on Sunday afternoons, focusing on this year's theme of (Extra)Ordinary People. It will explore the role of bystanders and ordinary people, not only during the Holocaust and other genocides but in everyday situations where people may be discriminated against for being different.

“It focuses on the individual and people who have experienced some kind of persecution trauma, but also the rescuers and the helpers, particularly in this country. When people have arrived, who's actually put their hand out, reached out and welcomed them.”

For Kim, the line between a participant and volunteer, especially at the workshops, is so fine, it’s invisible, “people who participate are also volunteering…because everybody's learning and everybody's teaching in the organisation.” 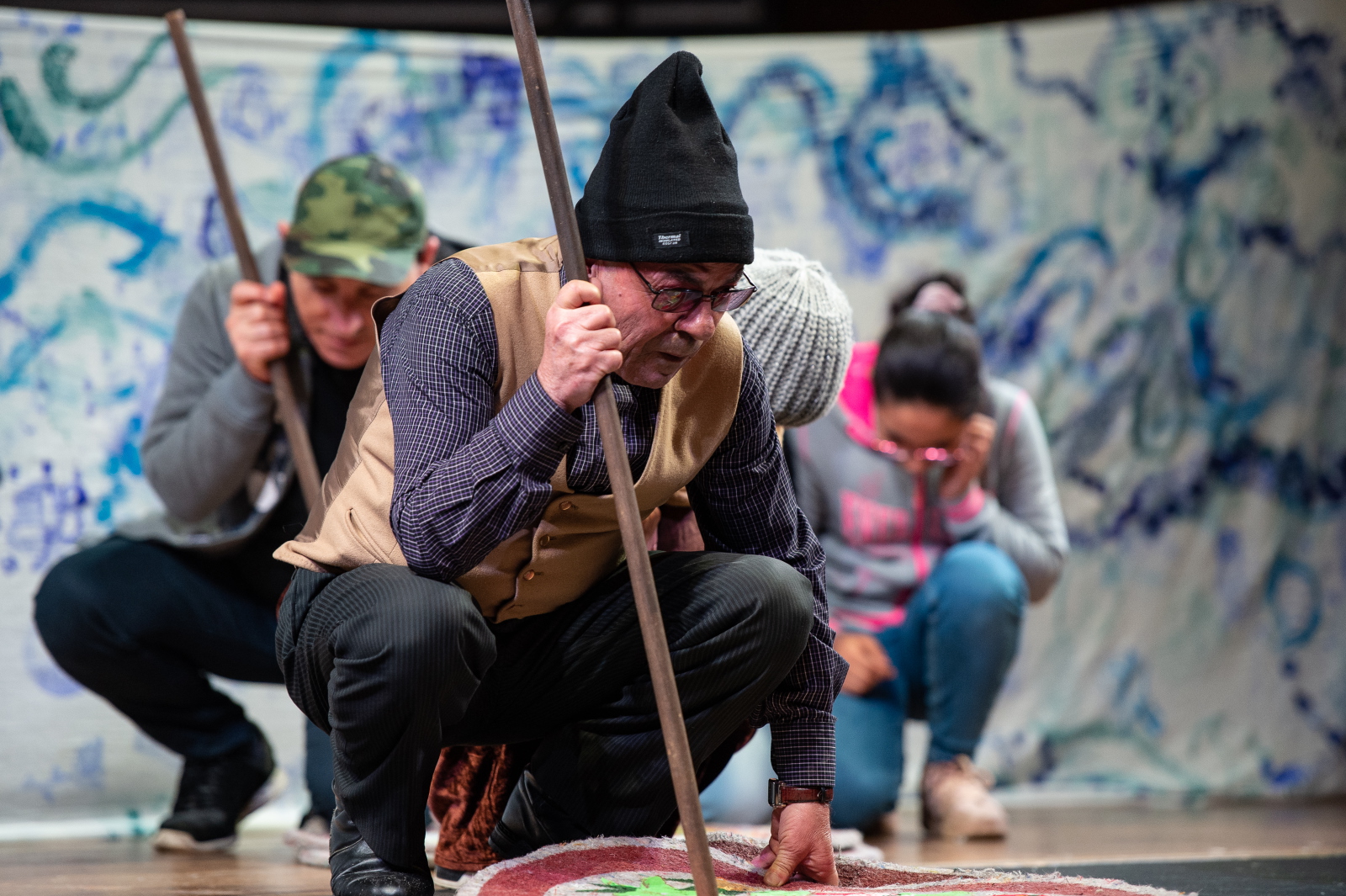 The events have “performances that rely on very few words, but are quite visual, so it overcomes language barriers between people who are actually doing it together as well as with people who are watching”. It means everybody, of any age, language, or background can get involved, with no special skills required: “You don't have to be a skilled anything you don't have to be a skilled artist or a skilled performer...you just need to want to do it”.

The workshops are all about:

“people learning from one another's stories. So, it may be a refugee story, but equally, it could be a story of somebody who is a migrant; who's family are migrants; or people who are just living in Kirklees that want to hear those stories, share them, and share their own as well. Everybody has a story to tell, it doesn't matter where they come from.”

6 million+ are always looking to work with new people and groups to commemorate the Holocaust, genocides and contemporary persecution at home and abroad, challenging discrimination of any kind and working towards a kinder future.